In this section we promote our articles and reports published in the frame of the CIREG project. 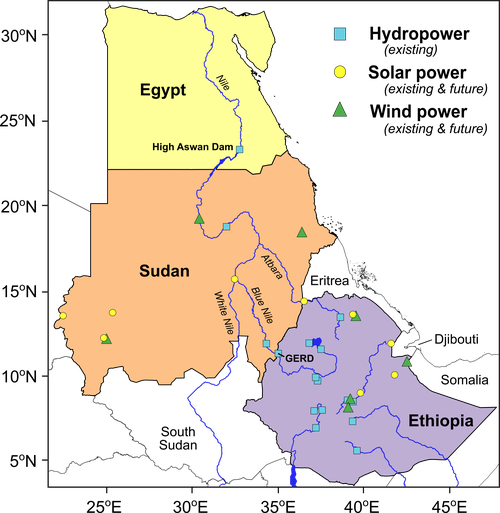 Acknowledging among others the research funding from the project CIREG, the Vrije Universiteit Brussel and the Potsdam Institute for Climate Impact Research just co-released in Nature Energy a study proposing a way to break the deadlock in the ongoing negotiations between Ethiopia, Sudan and Egypt around the Ethiopian mega-dam on the Blue Nile.  The solution is centered around the development of solar and wind power in Ethiopia and neighbouring countries and would result in win-win situations across the region.

Ethiopia, Sudan and Egypt are currently embroiled in a politically charged conflict that surrounds the soon-to-be-completed Grand Ethiopian Renaissance Dam (GERD), with Ethiopia’s energy objectives purportedly conflicting with the water needs in Sudan and Egypt. Here we show that the multiple political and environmental challenges that surround GERD could be mitigated by explicitly coupling its operation to variable solar and wind power, which would create an incentive for Ethiopia to retain a seasonality in the Blue Nile flow. We found that this could deliver fivefold benefits across the three countries: decarbonizing power generation in the Eastern Africa Power Pool; allowing compliance with Sudan’s environmental flow needs; optimizing GERD’s infrastructure use; harmonizing the yearly refilling schedules of GERD and Egypt’s High Aswan Dam; and supporting a strong diversification of Ethiopian power generation for domestic use and for Eastern Africa Power Pool exports. These results argue for an explicit integration of complementary hydro, solar and wind power strategies in GERD operation and Eastern Africa Power Pool expansion planning.

The article is available under this link. 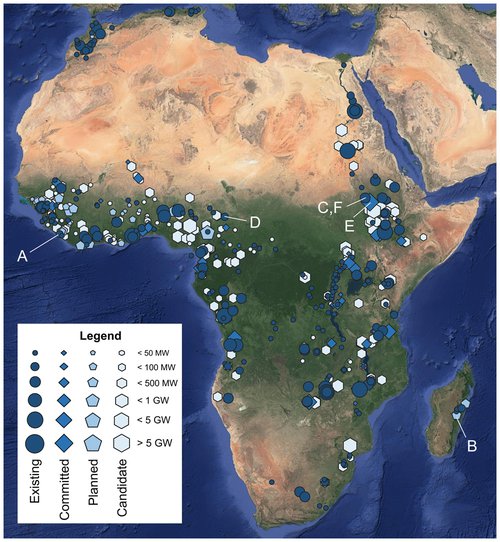 A spatiotemporal atlas of hydropower in Africa for energy modelling purposes

The Vrije Universiteit Brussel have published with the International Renewable Energy Agency a new paper entitled "A spatiotemporal atlas of hydropower in Africa for energy modelling purposes" in the new journal Open Research Europe. Public peer-reviewers are warmly welcomed to receive quality feedback.

The modelling of electricity systems with substantial shares of renewable resources, such as solar power, wind power and hydropower, requires datasets on renewable resource profiles with high spatiotemporal resolution to be made available to the energy modelling community. Whereas such resources exist for solar power and wind power profiles on diurnal and seasonal scales across all continents, this is not yet the case for hydropower. Here, we present a newly developed open-access African hydropower atlas, containing seasonal hydropower generation profiles for nearly all existing and several hundred future hydropower plants on the African continent. The atlas builds on continental-scale hydrological modelling in combination with detailed technical databases of hydropower plant characteristics and can facilitate modelling of power systems across Africa. 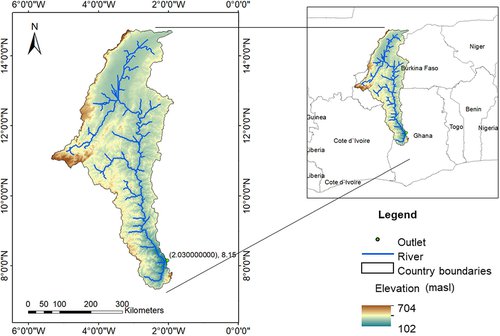 A new article sponsored by CIREG is released in Modeling Earth Systems and Environment. The hydropower potential of the Bamboi catchment was modeled to assess climate change impact.

Understanding climate change impacts helps adaptation eﬀorts in the energy sector. This study evaluates the impact of future climate change on the hydropower potential (HPP) of the Bamboi catchment in West Africa combining the HBV-light rainfall-runoﬀ model and a hydropower generation model. Two regional climate simulation datasets MPI-ESM-REMO and WASCAL under RCP 4.5 were applied to the validated HBV light to simulate the catchment discharge. Based on reference and future simulated discharges, a 1.3 MW run-of-river hydropower plant was designed to evaluate the HPP of the catchment. Hydrological and HPP changes were expressed as the diﬀerence between two future periods (2020–2049 and 2070–2099) and a reference period (1983–2005). The climate datasets projected a mean annual precipitation increase by 8.8% and 7.3% and discharge increases by 11.4% and 9.735% for the 2020–2049 and 2070–2099 periods, respectively. However, an overall decrease of hydropower generation by − 9.1% and − 8.4% for the 2020–2049 and 2070–2099 periods, respectively, was projected. These results stem from an increase in discharge for the rainy season not convertible into hydropower, combined with a decrease in discharge during the dry months that leads to important HPP losses.

The publication can be consulted under this link. 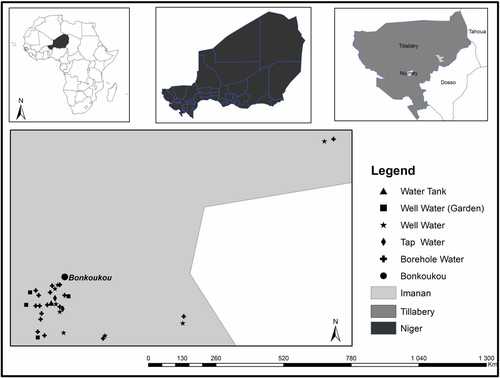 Physico-chemical and bacteriological quality of groundwater in a rural area of Western Niger: a case study of Bonkoukou

The precariousness of the rural population in Africa is often symbolized by the lack of potable and safe drinking water. This study investigates the physico-chemical and bacteriological characteristics of 32 water samples with respect to WHO standards. The water samples were collected from wells, boreholes and small drinking water supply systems (DWS) in and around the township of Bonkoukou (Niger). The Water Quality Index (WQI) tool was used to assess the overall water quality with different physico-chemical parameters. Where the pH of the samples was acceptable, the samples showed higher levels of mineralization and deoxygenation. Overall, the samples were slightly hard, chlorinated and sulfated but much alkaline and contained nitrate and nitrite ions 2–16 times higher than the WHO standards. The use of WQI shows that samples in the DWS are safe for drinking. Samples coming from wells are the most polluted (58.50%) compared to those taken from boreholes (53.00%), while the percentage of samples from boreholes, unfit for drinking, is higher (41.00%) than that of the samples taken from wells (25.00%). Moreover, water in this area was characterized by the presence of total germs indicating bacteriological pollution. Hence, for the supply of safe drinking water to the larger number of people in such a rural area, the capacity of actual DWS must be improved and widespread. 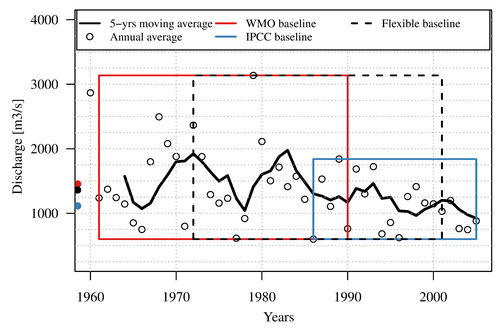 The choice of the baseline period, intentionally chosen or not, as a reference for assessing future changes of any projected variable can play an important role for the resulting statement. In regional climate impact studies, well-established or arbitrarily chosen baselines are often used without being questioned. Here we investigated the effects of different baseline periods on the interpretation of discharge simulations from eight river basins in the period 1960–2099. The simulations were forced by four bias-adjusted and downscaled Global Climate Modelsunder two radiative forcing scenarios (RCP 2.6 and RCP 8.5). To systematically evaluate how far the choice of different baselines impacts the simulation results, we developed a similarity index that compares two time series of projected changes. The results show that 25% of the analyzed simulations are sensitive to the choice of the baseline period under RCP 2.6 and 32% under RCP 8.5. In extreme cases, change signals of two time series show opposite trends. This has serious consequences for key messages drawn from a basin-scale climate impact study. To address this problem, an algorithm was developed to identify flexible baseline periods for each simulation individually, which better represent the statistical properties of a given historical period. 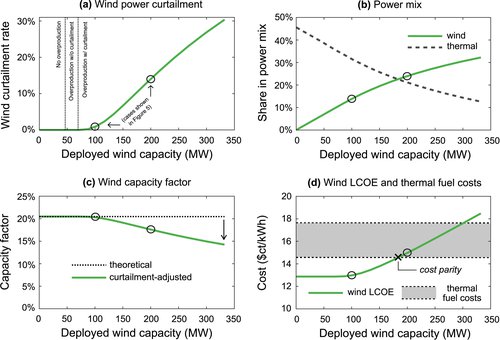 The department of hydrology and hydraulic engineering of the Free University of Brussels and the Center for Development Research in the University of Bonn published a new paper in Renewable and Sustainable Energy Reviews. Although the CIREG West African case studies are not directly concerned in the article, Sebastian Sterl and his co-authors used modelling techniques developed within the CIREG project.

The Caribbean nation of Suriname has historically depended on a mix of hydropower and oil-based fossil fuels for meeting electricity needs. Continued reliance on fossil fuels poses challenges both for climate change mitigation and for energy security. This paper explores the potential for increasing the share of renewables in Suriname's electricity mix, with a special focus on the complementary role of existing hydropower and future wind power infrastructure. We show that these resources have great synergetic potential for displacing fossil fuel-based power generation. Flexible operation of the Afobaka hydropower plant, newly in full possession of Suriname, allows significant wind power integration without violating grid stability and associated power quality requirements. Considering the trade-off between displacing expensive fossil fuels and limiting wind power curtailment on Suriname's island-like grid, our results suggest that integrating wind power in the Surinamese electricity mix is economically advantageous up to a share of 20–30%, independently of near-term demand growth. These results have wider relevance for climate policy in various Caribbean countries and other island states with existing hydropower infrastructure and substantial wind/solar power potential, for which this study fills an important literature gap. 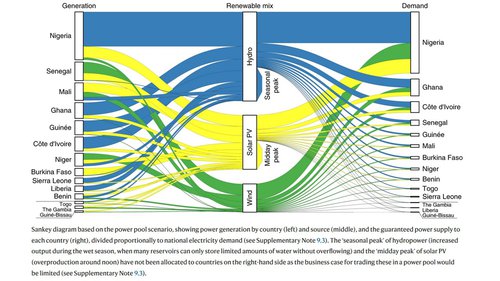 The worldwide growth of variable renewable power sources necessitates power system flexibility to safeguard the reliability of electricity supply. Yet today, flexibility is mostly delivered by fossil fuel power plants. Hydropower can be a renewable alternative source of flexibility, but only if operated according to adequate strategies considering hourly-to-decadal and local-to-regional energy and water needs. Here, we present a new model to investigate hydro–solar–wind complementarities across these scales. We demonstrate that smart management of present and future hydropower plants in West Africa can support substantial grid integration of solar and wind power, limiting natural gas consumption while avoiding ecologically harmful hydropower overexploitation. We show that pooling regional resources and planning transmission grid expansion according to spatiotemporal hydro–solar–wind synergies are crucial for optimally exploiting West Africa’s renewable potential. By 2030, renewable electricity in such a regional power pool, with solar and wind contributing about 50%, could be at least 10% cheaper than electricity from natural gas. A smart management of hydropower, combined with solar and wind energy, can provide the flexibility needed to power West Africa and at cheaper cost than using natural gas, according to a simulation model.

A new approach for assessing synergies of solar and wind power: implications for West Africa

West African countries’ energy and climate policies show a pronounced focus on decarbonising power supply through renewable electricity (RE) generation. In particular, most West African states explicitly focus on hybrid mixes of variable renewable power sources – solar, wind and hydropower – in their targets for the electricity sector. Hydropower, the main current RE resource in West Africa, is strongly sensitive to monsoon rainfall variability, which has led to power crises in the past. Therefore, solar and wind power could play a stronger role in the future as countries move to power systems with high shares of RE. Considering the policy focus on diversified RE portfolios, there is a strong need to provide climate services for assessing how these resources could function together in a power mix. In this study, climate data from the state-of-the-art ERA5 reanalysis is used to assess the synergies of solar photovoltaic (PV) and wind power potential in West Africa at hourly resolution. A new metric, the stability coefficient C_stab, is developed to quantify the synergies of solar PV and wind power for achieving a balanced power output and limiting storage needs. Using this metric, it is demonstrated that there is potential for exploiting hybrid solar/wind power in a larger area of West Africa, covering more important centers of population and closer to existing grid structures, than would be suggested by average maps of solar and wind resource availability or capacity factor for the region. The results of this study highlight why multi-scale temporal synergies of power mixes should be considered in RE system planning from the start. 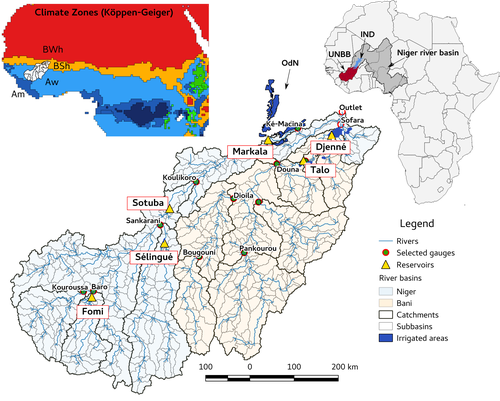 Water resources planning in the Upper Niger River basin: Are there gaps between water demand and supply?

The growing demand for food, water, and energy led Mali and Guinea to develop ambitious hydropower and irrigation plans, including the construction of a new dam and the extension of irrigation schemes. These two developments will take place upstream of sensible ecosystem hotspots while the feasibility of development plans in terms of water availability and sustainability is questionable. Where agricultural development in past decades focused mainly on intensifying dry-season crops cultivation, future plans include extension in both the dry and wet seasons.

Stay up to date with our Newsletter

Subscribe to our newsletter and stay up to date on the latest development and updates from CIREG and our Project & Partners. We normally send out a newsletter every two to three month.

Cookies disclaimer Our site saves small pieces of text information (cookies) on your device in order to deliver better content and for statistical purposes. You can disable the usage of cookies by changing the settings of your browser. By browsing our website without changing the browser settings you grant us permission to store that information on your device.